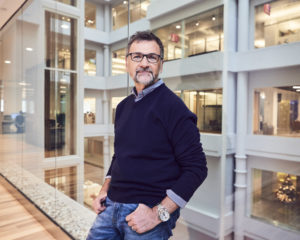 Rich has the honor of leading the creative work for the FCB Health Network around the world. During his tenure, the Network has been awarded with Cannes Lions, Effies, One Show Awards, D&AD Awards, Global Awards, MM&M Awards, Manny Awards and DTC National Awards.

MM&M Magazine named the Spiriva “Elephant” campaign one of the 10 best DTC campaigns ever created.

Prior to working in healthcare, his work also won Clio, One Show, and Effie awards. His work for Canon is part of the permanent collection of the New York Museum of Modern Art. His “Can You Hear Me Now?” Verizon Wireless campaign slogan was inducted into the Advertising Walk of Fame in 2002.

The DTC Hall of Fame is designed to recognize industry members who have made significant contributions to innovate and progress DTC / consumer communications. Industry-wide nominations are collected and then the final four inductees are determined by DTC Perspectives and our Advisory Board, a select group of industry experts who serve as counsel. Inductees can be from any sector of the DTC Industry: Pharmaceutical Manufacturer, Agency, Media Channel, DTC Service Provider, Government, Academia, etc. Nominees should have a minimum of 5-10 years’ experience in healthcare marketing to be considered eligible. Given the newness of the field, it is not necessary to be retired to be eligible. As part of the DTC National, the DTC Hall of Fame festivities include a cocktail party followed by a formal induction ceremony on April 16th presented by PatientPointwith video tributes and live introductions from industry leaders, as well as an address by the Hall of Fame inductees. Each inductee is also profiled in the annual issue of DTC Perspectives Magazine.